Just as opalescent enamels, opaque white enamels tend to develop a brownish chemical reaction when they come in contact with silver. Opaque enamels are rarely applied on top of precious metals in a painted enamel context (since they entirely obscure it, copper is often used instead); however they are often used in contact with fine silver cloissons (wires) in the cloissoné technique. This article aims to help counter this effect when this is the case.

If you find this article useful, I do ask that you consider supporting this store and further testing, selection & recommendations on my part by purchasing your materials through us. For that you have my gratitude.

As all such reactions to silver (also seen in most warm transparent enamels such as reds and yellows), they are due to metal oxides being taken in solution within the enamel glass while the enamel is in a fluid state: while being fired in the kiln. Thus prolonged and/or repeated fires tend to increase the severity of the reaction. A first line of defence against this effect is then to limit the amount of time in the kiln by:

That being said, it is always wise to choose of a particular white enamel which displays less tendency to brown when in contact with silver. For this reason I’ve created the following test with the opaque white enamels we have available in the store, and a few extra others as a point of comparison. The enamels used:

My conclusion from this test is that I would choose Soyer 160 or Schauer 202 for this application. Further:

I consider this palette to have received a normal amount of firings and layers: two layers to reasonably fill the cells, firing to orange peel; another layer plus stronger firing to assess how much enamel is still necessary to entirely fill the circles and to allow all whites to properly stick to the wires; a fourth layer to fill up gaps, followed by a measured fire and grinding down level; followed by a final, careful gloss fire.

A few more notes on the process are given further below, but for mored detail here you can find my Patreon video about the process and reasoning I followed. In it I go into a lot more depth and nuance than I possibly could in this article. You can learn more about my Patreon subscription service here. Please do not assume this to be my first tutorial on cloisonné, since I focus on the reasoning behind a useful test palette, not the technique itself. That will be upcoming as a class in the future.

I wanted to take this test further, push the white enamels to their limits. Thus after this test, I fired the palette again, for a long time, until I noticed some wires were beginning to sink (probably the beginning of a eutectic melting into the copper, which I cannot observe directly due to the opaque enamel – you can see that better in the Patreon video). This is the result:

The numbers are in this case vitrifiable paint fired in place. Click here to view full size.

More defects and discolouration of course appeared due to the very prolonged fire. This provides further information which can help choose the right enamel for any particular application. I would of course always advise against firing a piece in this way!

I would also advise against using ODW1 in cloisonné pieces or other techniques in combination with other enamels as it exhibits a tendency to cracking. It is a white watch dial opaque that is best used on its own, and suited for that purpose (painting on enamel).

I applied fine silver cloissons on a layer of Soyer 1 copper flux fired on top of copper. I also applied both Soyer 3 silver flux to the top half of both the inside and outside of the wire on the larger circles, and likewise Blythe C1 gold flux to the medium circles. The purpose of the flux is to test if this strategy helps isolate the white enamel from making contact with the silver. This image illustrates the positioning of the fluxes (dry, before firing to gloss):

After firing the flux, I applied the white enamels between and within the cells, in four layers up to the level of the wires. 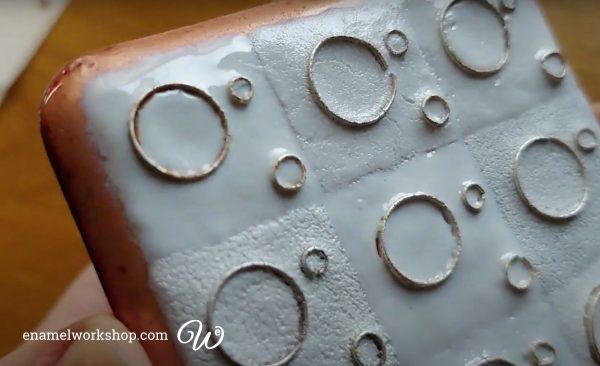 Up to the the last, prolonged firing test, the enamels were always fired for the shortest time possible. Since the different whites have different melting points, this means some were molten to gloss while others went barely past sugar coat. For more information on the precise process followed, watch my Patreon video.

The enamel is packaged in cute bottles that have a colored print of the sample plates so you never forget how it looks like… Love this place! Fast shipping international. READ FULL REVIEW “”

My orders were perfect in any way. Product, package, support, quick….all you want and need.
She answers very quickly and no matters what the questions are. Always helpful and friendly.
You and your products are the best, Mer! READ FULL REVIEW “”

I ordered S-64 paints as well as some white base enamels, all arrived well-packaged and intact. Mer was very accommodating and accessible, answering questions’s I had about the products online before purchasing them. I highly recommend ordering from her shop! READ FULL REVIEW “”

I ordered T8 and Soyer blue enamel to practice the Grisaille class, the enamels are great and I received samples of a medium and paint I had questions about, which was a really nice thing to add! And the class was perfect! 💙 READ FULL REVIEW “”

I ordered the beautiful spatulas and I am delighted by their quality. READ FULL REVIEW “”

Mer’s kits provide an opening into the field for even the most uninitiated – coupled with her videos you are super set to a great start. READ FULL REVIEW “”

Bring Me My BattleAxe I love receiving a package from Mer’s store. I can’t resist her amazing packaging : the enamels are stored in jars (no plastic bags) with a palette sticker on the lid. Brillant idea ! READ FULL REVIEW “”

Mer is great resource for any enamellist, she offers loads of information and inspiration. Love my olive tree palette knives. READ FULL REVIEW “”

Enamel workshop is an absolute wonder in the enamel world. We can shop great quality products, tested and approved by the amazing artist and owner. READ FULL REVIEW “”

Love everything I ordered from your shop! The palette knives are the best I have the pleasure to own, the tiny brushes are very versatile and very useful for wet packing and the pigments are nothing short of amazing! READ FULL REVIEW “”

The web site is a fountain of useful information.  This shop is a truly wonderful resource in the EU. READ FULL REVIEW “”

Everything I buy from Mer is fabulous. Her videos are brilliant and she’s become an online friend who has a great passion in the enamelling process and is extremely talented. READ FULL REVIEW “”

No products in the cart.

This website uses cookies to improve your experience while you navigate through the website. Out of these, the cookies that are categorized as necessary are stored on your browser as they are essential for the working of basic functionalities of the website. We also use third-party cookies that help us analyze and understand how you use this website. These cookies will be stored in your browser only with your consent. You also have the option to opt-out of these cookies. But opting out of some of these cookies may affect your browsing experience.
Necessary Always Enabled
Necessary cookies are absolutely essential for the website to function properly. These cookies ensure basic functionalities and security features of the website, anonymously.
Functional
Functional cookies help to perform certain functionalities like sharing the content of the website on social media platforms, collect feedbacks, and other third-party features.
Performance
Performance cookies are used to understand and analyze the key performance indexes of the website which helps in delivering a better user experience for the visitors.
Analytics
Analytical cookies are used to understand how visitors interact with the website. These cookies help provide information on metrics the number of visitors, bounce rate, traffic source, etc.
Advertisement
Advertisement cookies are used to provide visitors with relevant ads and marketing campaigns. These cookies track visitors across websites and collect information to provide customized ads.
Others
Other uncategorized cookies are those that are being analyzed and have not been classified into a category as yet.
SAVE & ACCEPT