Base enamels for painting

The enamel used as a base for painting on enamel interacts both physically and also chemically with the vitrifiable pigment that will be applied on top.

The physical aspect refers to its colour & opacity, and how this interacts with the colour & opacity of the vitrifiable paint. The traditional base for painting is an opaque or opalescent white, as a neutral base that will not influence the colour of the paints and will show them to their best advantage even if they are not the most opaque. However a multitude of effects can be achieved by changing any of these variables, in accordance to the artist’s objective.

Besides this, the chemical composition of the base enamel also affects & interacts with the paint, and this should be taken into consideration when choosing the base. Some aspect of the texture & opacity of the fired surface also seems to affect the behaviour of the paint, some enamel bases acting as an easier surface in which to work, particularly when it comes to fine, minute gradations.

There isn’t a single base that can be recommended for all types of work, but after extensive testing I’ve come to the conclusion that Schauer 64 opalescent white (applied directly on copper) is as close as it gets. It works very well with all our colours (and every other vitrifiable paint I have tested) and makes the work easy. This is thus my go-to recommendation for a versatile base. As mentioned, I have done a lot of tests in order to offer the best enamels for a particular purpose in my store. You can see just some of these tests at the end of this article. From these I have made a selection due to their properties and availability, reducing the number of enamels I recommend as a white base to the 4 that I mention in this article.

If you find this article useful, I do ask that you consider supporting this store and further testing, selection & recommendations on my part by purchasing your materials through us. For that you have my gratitude.

There are however other options that can be considered, in particular when particular effects are sought after.

The best way to find the perfect base for your particular project is to do the testing yourself, as only you know what it is that you need. However I do hope the following can serve as a general guideline. A particularly useful testing tool, I find, is a palette with multiple bases fired together, over all of which the paint is applied and thus fired at the same time under the same exact conditions.

From these tests it appears that most colours, due to the metallic oxides utilised to colour them, are not chemically affected in great measure by the base enamel, with the notable exception of:

In particular, the needs of gold are opposite those of cadmium+black, behaving best on the bases that perform worse for the other. Again, as a neutral base good for all colours, I can recommend Schauer 64 and also Blythe T6 opaque white.

Gold-bearing pinks develop faster to a rosy hue on a softer base such as Schauer 202 opaque white, while on this same base cadmium based pigments show a strong tendency to burn out much faster, and black pigment shows a tendency to turn green, particularly after repeated strong fires.

Cadmium-bearing yellows, oranges and reds are best preserved on a hard base, Milton Bridge ODW1 showing a remarkable synergy with these pigments, to the extent that even slight gradations, not possible on other bases without some degree of blackening, are possible on this base (I do not recommend to apply this enamel in combination with others as a base, due to different coefficients of expansion: it is best used alone as a base for painting, including the counter-enamel). Blythe T6 exhibits similar properties although to a slightly lesser degree and it is an excellent base for painting. Black shows the least degree of turning green when applied over these bases as well. Conversely, on these hard white bases, gold-bearing pinks have more difficulty developing intense rose hues, though this can to some extent be countered by applying these colours first and firing more intensely to develop them. 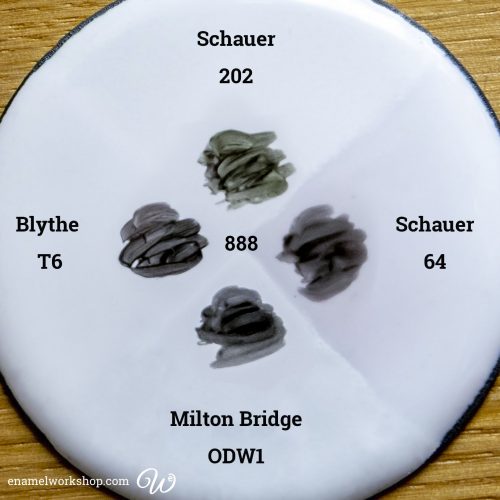 As mentioned above, the surface or opacity of the base itself affects the progress of the work on very fine gradation, and this is very clearly apparent when performing these tests, Schauer 64 being the one in which soft gradations are easiest to perform (and generally speaking all opals have this softening property), followed by T6, 202 and finally ODW1 making the work harder. This is clearly apparent in the tests, click on the pictures to be able to zoom in to the details.

*Not all yellows or reds. We always indicate when a colour contains cadmium.

I ordered S-64 paints as well as some white base enamels, all arrived well-packaged and intact. Mer was very accommodating and accessible, answering questions’s I had about the products online before purchasing them. I highly recommend ordering from her shop! READ FULL REVIEW “”

I ordered T8 and Soyer blue enamel to practice the Grisaille class, the enamels are great and I received samples of a medium and paint I had questions about, which was a really nice thing to add! And the class was perfect! 💙 READ FULL REVIEW “”

Everything I buy from Mer is fabulous. Her videos are brilliant and she’s become an online friend who has a great passion in the enamelling process and is extremely talented. READ FULL REVIEW “”

My orders were perfect in any way. Product, package, support, quick….all you want and need.
She answers very quickly and no matters what the questions are. Always helpful and friendly.
You and your products are the best, Mer! READ FULL REVIEW “”

The enamel is packaged in cute bottles that have a colored print of the sample plates so you never forget how it looks like… Love this place! Fast shipping international. READ FULL REVIEW “”

The web site is a fountain of useful information.  This shop is a truly wonderful resource in the EU. READ FULL REVIEW “”

Mer’s kits provide an opening into the field for even the most uninitiated – coupled with her videos you are super set to a great start. READ FULL REVIEW “”

Bring Me My BattleAxe

I ordered the beautiful spatulas and I am delighted by their quality. READ FULL REVIEW “”

Love everything I ordered from your shop! The palette knives are the best I have the pleasure to own, the tiny brushes are very versatile and very useful for wet packing and the pigments are nothing short of amazing! READ FULL REVIEW “”

Enamel workshop is an absolute wonder in the enamel world. We can shop great quality products, tested and approved by the amazing artist and owner. READ FULL REVIEW “” I love receiving a package from Mer’s store. I can’t resist her amazing packaging : the enamels are stored in jars (no plastic bags) with a palette sticker on the lid. Brillant idea ! READ FULL REVIEW “”

Mer is great resource for any enamellist, she offers loads of information and inspiration. Love my olive tree palette knives. READ FULL REVIEW “”

No products in the cart.

This website uses cookies to improve your experience while you navigate through the website. Out of these, the cookies that are categorized as necessary are stored on your browser as they are essential for the working of basic functionalities of the website. We also use third-party cookies that help us analyze and understand how you use this website. These cookies will be stored in your browser only with your consent. You also have the option to opt-out of these cookies. But opting out of some of these cookies may affect your browsing experience.
Necessary Always Enabled
Necessary cookies are absolutely essential for the website to function properly. These cookies ensure basic functionalities and security features of the website, anonymously.
Functional
Functional cookies help to perform certain functionalities like sharing the content of the website on social media platforms, collect feedbacks, and other third-party features.
Performance
Performance cookies are used to understand and analyze the key performance indexes of the website which helps in delivering a better user experience for the visitors.
Analytics
Analytical cookies are used to understand how visitors interact with the website. These cookies help provide information on metrics the number of visitors, bounce rate, traffic source, etc.
Advertisement
Advertisement cookies are used to provide visitors with relevant ads and marketing campaigns. These cookies track visitors across websites and collect information to provide customized ads.
Others
Other uncategorized cookies are those that are being analyzed and have not been classified into a category as yet.
SAVE & ACCEPT